You are here: Home1 / Films

Born in Benghazi, Libya, Vivienne Roumani grew up in a household where Arabic, Hebrew, and Italian were spoken interchangeably, and language was a mode of childhood entertainment for her and her three brothers. At age 12, Vivienne immigrated with her family to Boston. Vivienne’s family’s experience is told in her feature film The Last Jews of Libya, which premiered at the 2007 Tribeca Film Festival and screened worldwide and on the Sundance channel.

Her attachment to language led her to study philosophy and Romance languages at Simmons, and ultimately to graduate study in librarianship and management at a time when library education was starting to incorporate electronic information technology. With management positions at the Library of Congress, Johns Hopkins, and UC Berkeley she initiated digitization projects, working with both new and old media and writing and lecturing about electronic access.

Vivienne began making documentary films after leaving the library world and after serving as the executive director of a national not-for-profit organization. But her interest in the impact of the digital revolution continued to grow, stimulated by all the press focus on changes to the published word, and her own professional and personal experience. Making this feature-length documentary, Out of Print, was therefore a natural – indeed a mandatory – next stop in Vivienne’s voyage as a filmmaker and storyteller. 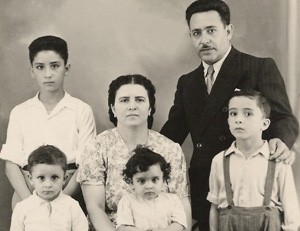 OUT OF PRINT
Out of Print draws us into the topsy-turvy world of the written word, illuminating the turbulent, exciting journey from the book through the digital revolution. Writers, publishers, readers all in flux. Booksellers closing shop. Librarians and teachers seeking new roles. Storytellers like Ray Bradbury, complemented by evocative visuals, weave a compelling tale. Scott Turow and Jeff Bezos, founder of Amazon as an online bookstore, place us in the middle of their debate. People tell us they read snippets all day long, yet one of five Americans no longer reads a single book, in any format, in an entire year. Personal stories of parents and students take us into their worlds, highlighting how this revolution is changing every aspect of the printed word — and changing us.

THE LAST JEWS OF LIBYA

The Last Jews of Libya documents the final decades of a centuries-old North African Sephardic Jewish community through the lives of the remarkable Roumani family, residents of Benghazi, Libya, for hundreds of years. Thirty-six thousand Jews lived in Libya at the end of World War II, today none remain. Based on the recently discovered memoirs of the family’s matriarch, Elise Roumani, as well as interviews in English, Hebrew, Italian, and Arabic with several generations of the Roumani family and a trove of rare archival film and photographs, it is an unforgettable tale.